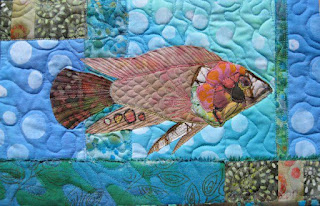 Poems surprise me with unexpected details. A few carefully chosen words can evoke an entire scene in my imagination.

"The Catfish" by Matthew Beacom does this so beautifully.

The Connecticut Review awarded "The Catfish" the Leo Connellan Prize, and published it in their Spring 2010 issue.

After Sunday Mass, with nothing
in my stomach but the Eucharist
and a couple crackers, we went
up the new highway to see the dam
across the Missouri at Gavin’s Point.
Dad drove the ten of us in the red
Ford wagon, the one that had a golden
letter B on the door before we bought it,
second hand, from Braunger’s Meats.
I had to sit between Mom and Dad,
since I was the smallest and hadn’t
been good in church that morning
(I hid under the pew during the sermon.)
We drove along the top of the dam.
A pile of earth and chalk and concrete,
it was as wide as a country road
and almost two miles long. Bluffs rose
high above the water, and power
lines from the electric dynamos hung
above low, grassy hills dried brown.
The dam stopped the river to make
a lake that drowned 30,000 acres.
I’d never seen so much water before.
We took a tour of the turbine room
and aquarium. There was a glass wall
with the lake behind it, and in the water
I saw a catfish as big as a man looking
at me—its whiskers as long as my arm.
I couldn’t speak; I could hear nothing;
and darkness constricted around me
like a camera’s aperture shutting.
I fell—like Jonah swallowed by the whale. 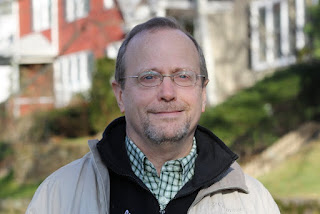 Matthew Beacom was born and raised in Sioux City, Iowa, and has lived in Connecticut with his wife and children for over 20 years. He is a part-time student in the creative writing MFA program at Southern Connecticut State University and is employed as the Head of Technical Services at the Beinecke Rare Book and Manuscript Library at Yale University.
Posted by Maria Padian at 6:34 AM