A friend whose daughter is applying to college this year shares this chilling tale:

As they compiled a list of schools to visit she suggested that her daughter check out an all-women’s college. Her daughter has been attending a co-ed, public school.

“I told her that many women have chosen all-female colleges because they feel they offer an empowering, supportive environment. I mentioned that often, women feel constrained from speaking out in classes where often the boys/men dominate the discussion.”

“Yeah, right. Let me tell you something, Mom. Guys don’t care if girls raise their hands in class. Other girls care. Guys don’t put you down and shut you up. It’s the other girls in the room, who want to keep you in your place.”

According to my friend, her daughter, who is a good student and speaks up in class frequently, has been getting hisses, catcalls and exaggerated “eye rolls” from a cadre of girls who sit behind her. One girl in particular … who, ironically, is a straight-A student who affects the look and language of a character right out of the CW … will often mutter, “Just. Stop. Talking,” whenever my friend’s daughter participates.

The friend’s daughter (let’s call her Jane; not her real name) has gone to the teacher and asked, “Do I speak too much in class?” and been assured she does not. The teacher has been made aware of these behaviors and is on the lookout for them, but it’s a big room and she herself has not heard these comments. Jane doesn’t want her seat changed, because that would require moving someone else and possibly calling attention to the situation. Jane certainly doesn’t want her mother intervening by calling these girls’ parents. She wasn’t even happy that her mother told the teacher what’s been going on. So … the status quo prevails. At this point, Jane still speaks up in class and takes the hits.

But for how long?

If the only result of all this is that Jane doesn’t apply to Smith this year … well, no biggie. There are plenty of colleges out there and at most of them women outnumber men anyway. If another result is that Jane learns to distrust girls … well, that’s unfortunate, especially because as an adult, womens’ friendships with each other can be such a lifeline.

But there’s another part of this that has such far reaching implications for Jane. Because when her mother discusses this situation with her, Jane isn’t angry. Jane isn’t wheeling around and telling these girls to f*$# off. Instead, Jane is ashamed. Jane doesn’t want anyone to know it’s going on. Deep down, Jane is wondering what’s wrong with her, since these girls are criticizing her.

Basically, Jane is being bullied, but with such finesse and subtlety that it’s hard to pinpoint or punish. The bullies themselves would probably be shocked if anyone told them that’s indeed what they’re doing. These are girls who in fact think very highly of themselves. One has actually been known to comment, “I mean, don’t you think we’d be a great subject for a T.V. reality show?”

Meanwhile, every time Jane absorbs a comment and does nothing, it’s like drinking a slow acting poison that you gotta know has a corrosive effect on her self esteem.

Jane will probably never jump off a bridge or hang herself in her dorm room, but she’ll learn to question herself. She’ll eventually learn to shut her mouth. And she’ll learn to turn her pain inward, instead of speaking up for herself. And that’s going to have implications for all her relationships, both male and female.

We think of the bully as the big mean kid on the playground picking on the skinny shy guy. Or the Regina George “Mean Girl,” who is blatant and over-the-top grotesque in her cruelty. Or the college student posting intimate videos of his gay roommate. We can identify and punish and fight back against that “big” stuff.

But there’s a subtler game being played here which only the kids are fully aware of, and it’s no less damaging.
Posted by Maria Padian at 6:57 AM 1 comment: 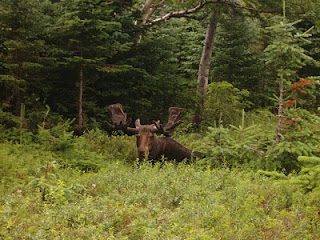 “I like criticism, but it must be my way.”
Mark Twain

Yesterday was the first day of moose hunting season in Maine. As our family drove home from the western mountains where we had hiked amid idyllic foliage, we passed pickups from which giant moose racks poked from the back. In one parking lot, a moose hung from a hook, over a giant scale, surrounded by a posse of men and boys splashed in the blaze orange of vests and hats.

In addition to wondering about my own stupidity for hiking during hunting season, I felt a kinship with those moose. In my world, with a new novel set to launch in March, it’s the start of the reviewing season. Only instead of hunters toting guns, I’m in the crosshairs of critics. My publisher has just shipped the ARCs (Advanced Reader Copies, a.k.a. galleys, a.k.a. bound paperbacks still containing typos) of the novel to reviewers, and before long the all-powerful-opinionated horde will take aim at my baby.

Why would a sane person subject herself to this? Better to pin a sign on my back that reads “Kick Me” and walk down a middle school hallway. Or walk into an Irish pub in Boston wearing a Yankees hat. Either would be quicker, and less painful.

The simple answer to this question is: I don’t have a choice. Publishers do this because they believe they publish good books, which will get good reviews, which will result in $$$ for all concerned. This is, after all, a business.

Of course, reviewers don’t see themselves as members of some publishing house’s publicity staff. They see themselves as arbiters of taste and culture. Rendering a “service” to readers. Separating the wheat from the chaff.

Picking winners and losers, more like. Anointing and condemning. Caesar in the coliseum, deciding: “Thumbs up? Or thumbs down?”

Like most writers, I love reading good reviews of my work. I bask in the sunshine of critics' compliments. I take them seriously, and allow myself to believe them.

And like one of my favorite writers, Mark Twain, I have nothing but the utmost contempt for critics who don’t “get” my writing, and publicly display their ignorance by publishing a negative review. Twain said it best when he wrote:

“The critic's symbol should be the tumble-bug: he deposits his egg in somebody else's dung, otherwise he could not hatch it.”

Of course, as a critic himself, Twain was not above eviscerating a fellow author. Granted, James Fenimore Cooper was long dead when Twain wrote "Fenimore Cooper’s Literary Offenses," so one could argue it wasn’t a “review” but rather, “literary criticism.” Whatever. It pretty much ruins the guy. You simply can’t read The Deerslayer or Last of the Mohicans again. Not without laughing until tears roll.

I suppose, as an author, it doesn’t reflect well upon me that I find this essay, which mocks another’s work, hysterically funny, but of course, at the time Twain was redefining the canon. While wearing a humorist’s disguise. “I’m glad the old masters are all dead, and I only wish they had died sooner,” he wrote.

Here’s the thing: I don’t mind being reviewed by smart people who read carefully. Even if they don’t love my book (sob!) they might have criticism which will help me write a better book next time. The problem is when a reviewer gets major things wrong … like characters’ names and basic plot facts. That’s when you tremble, because they wield power, and power in the hands of the poorly informed is … bad.

It’s also out of my control, so: time to dress for the season. For hiking in the woods, it’s blaze orange during the next few months. Otherwise, it’s the Rhinoceros Hide coat. Because if anyone other than my mom, my best friend, or my dog reviews my book, I’m gonna need to be wearing some thick skin.