A Mess of One's Own 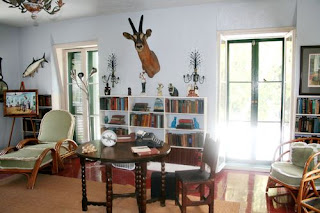 I remember one memorable trip I took to Key West, Florida, where I visited Ernest Hemingway's home. Overrun with six-toed cats and wallpapered with photos of immense fish, it also had a palm-cosseted blue tile outdoor pool and an open, sunny writing room over a building adjacent to the main house. (photo above left)

I remember the near-reverent hush that came over our tour group as we passed through that room. I found myself wanting to touch his typewriter, give those keys a few good clacks of my own. I'm no Hemingway fan, but I couldn't help but feel awe as I stood in the space where he wrote Nobel-prize-winning novels. This is where it all happened, I thought. As if a writing place is somehow magical space.

So not my office.

I wrote my first novel in the basement. Granted, there's heat, and the floor is carpeted. But my "office" was a windowless area off the furnace room, and I allowed it to become a dumping ground for files and boxes of photos and ... shells from Florida and my old baby shoes and ... oh, the list goes on. The horror, the horror. I've actually included a picture of that computer desk in the slideshow I present to students when I do author visits. I wrote Brett McCarthy: Work in Progress here: 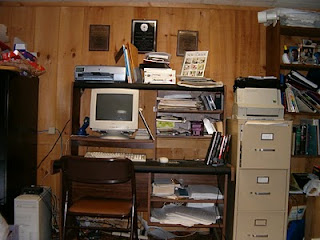 Things picked up a bit after Brett. I abandoned my hopelessly dark and messy cave and moved to a corner of the den, where there are windows and a delightful woodstove. I can get away from everyone here and work in relative quiet and if I cran my neck hard enough can check out the weather through the line of small, high windows behind me. I wrote Jersey Tomatoes Are the Best here: 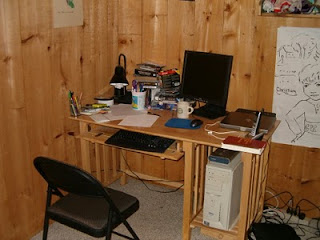 To date these far-from-magical spaces have worked for me, but I'll confess: I want more. I want the Hemingwayesque Florida studio. I want the daybed for lounging when I feel the need to "create" from a horizontal position. I want the cozy writer's cottage surrounded by flowers, perhaps with a view (the ocean?)and most certainly with an amazing desk. Pottery Barn makes a nice one: 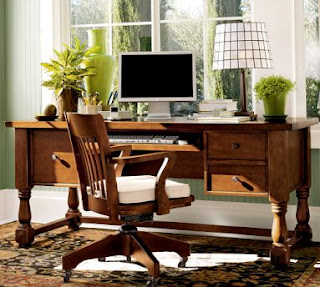 Ask anyone who knows me: I'm not a materialistic person. I rarely shop, I don't care about cars or jewelry or stuff of any sort. The only things I buy which I probably don't need to buy are books (I'm a sucker for a beautiful hardcover ...) But when it comes to a writing place, and I check out where writers work, I feel true longing.

When we first moved to Maine, my writing place was pretty amazing. It was an old stable which had been converted into an artist's studio and it gleamed with blond wood and white bookshelves. One entire wall was lined with long windows, and the only heat source was a woodstove. I would write on a makeshift desk that looked into the yard, and whenever I pulled my attention away from the page I could see the resident red squirrels run up and down the trees.

Unfortunately, that studio was part of a rental, and we eventually had to move. I took to writing in coffee shops after that, mostly because we had very young children and I needed to get out of the house for a couple of hours. The "white noise" of patrons chatting and the smell of really, really good coffee actually helped me carve out a focused, creative space in my head, and I got some good work done at Wild Oats and The Bohemian Coffeeshop in Brunswick.

Still, as I take my first tentative steps into a third novel, I'm wondering whether an upgrade is possible. One writing friend put a shed in her backyard and fixed it up into a very cozy writing "house." I think Annie Dillard writes in a shed. It's worked quite well for her ....

Of course, the good news is that while an extraordinary writing place is a wonderful thing, it's not a necessary thing. Quiet, paper, and a few square feet that you can walk away from and trust that what you've left there will remain undisturbed until your return, is really all that's needed. Ultimately, the magic is all in your head. In the imaginative mess of one's own we writers create.

Forget the foxtrot. Forget the jitterbug, swing, the rhumba, mambo, shagging, pogo, slam, the electric slide or that cruise-ship-and-elementary-school-gym-class favorite: the macarena.

Today's teens grind. And if you thought Elvis and those too-hot-for-television hips were racy, you ain't seen nothin'.

At the public high school in the Maine town where I live, the Vice Principal has banned dances until further notice as a result of grinding. In other towns, administrators have taken a more creative approach. I read of one case where the students must sign pledges and agree to shun obscene dancing. This earns them a bracelet (something approximating the type you get when you're admitted to the hospital) which they must wear at the dance. If they violate their pledge (use your imagination) their bracelet is snipped and they are ejected. By some burly chaperone, no doubt.

Ah chaperones. The unsung heroes of the public school system. Made of tougher stuff than me. I cannot imagine eyeballing a gym's worth of writhing teenagers, flash assessing obscene behavior and pulling the culprits apart. I can understand why a Vice Principal may decide to not go down that road.

What I know about grinding I've heard from my own teens as well as gleaned from the panicked parental rumor mill in our town. Plus, when a mother of teens from Pittsburgh mentioned that grinding was a concern for her (why did I think it was only happening in Maine?)I decided to do a You Tube search for grinding.

I wear my author's cap for the purposes of this blog, so I will resist parental ranting about grinding. I'm trying to understand it in order to authentically portray the characters in my books, just as I had to get up to speed on text and instant messaging, Facebook, and playing phone pranks on a cell phone. I'm not judging; just trying to understand.

Still, my age and maternity encroach, and I find myself thinking of the movie Red Hot Ballroom. If you haven't seen it, run (don't walk) to your nearest video store and check it out. It's a documentary about an annual citywide ballroom dance competition that takes place among New York's elementary school students. Watch these little kids move and your faith in the future will be affirmed. Watch as they master difficult dances and show us how joy and beauty can emerge from form.

My advisor in college, the poet Robert Pack, was a big believer in form. He believed that the formalistic rigor in writing something as complicated as a sestina or a sonnet actually released creativity instead of inhibiting it. Adhering to form opened possibilities, he felt. It made you work a little harder, and wonderful things resulted.

Some of the hip hop moves I found on You Tube under the search "grinding" were pretty cool, complicated steps that would require a lot of practice and talent to perform. Other examples of "grinding" I've seen done much better by the dogs in my neighborhood. I guess it's up to the chaperones to sort it all out.
Posted by Maria Padian at 2:40 AM 1 comment:

I’m trying something new with my next novel: narrating from a male point-of-view. A teenage male, no less.

For a woman-of-a-certain-age, like myself, (you fill in the number) this is a stretch. Not only because I have to adopt the parlance of the high school cafeteria, but I have to inhabit the mind of a 17-year old boy and try to respond to the world his way. Everyone advises me to just keep thinking sex, sex, sex, sex … and occasionally FOOD!

But that’s the stereotype, isn’t it? Thuggish preoccupation with overwhelming physical need. Best expressed in sentence fragments and obscenities.

Boys are so much more. I know my boy is, and I’m fascinated by the layers of teasing, random anecdote, sports talk, current events talk, and NO talk we have to mine before hitting the rich, emotional lode our young man carries within. It’s a process, and requires me to unhinge my own gateways into conversation and simply remain open; listening and waiting.

The linguist, Deborah Tannen, author of You Just Don’t Understand, posits that men and women speak so differently that their conversations are essentially cross-cultural communication. I totally buy that, and incorporating that premise into my day-to-day has added a level of humor and depth of understanding between my husband and myself that has helped our marriage survive. It’s helped me talk to my son. Expressing it artistically, however, is another challenge.

So in addition to eavesdropping on teenagers and consulting with my own teens, I’ve been looking for role models: authors who have “cracked” the authentic, contemporary male voice. Sherman Alexie’s Absolutely True Diary of a Part-Time Indian tops my list, as does Libba Bray’s Going Bovine. It’s encouraging to me that Libba is a woman (You go, girl! You speak boy!) Right now I’m halfway through Garret Freymann-Weyr’s After the Moment, a novel in which she very consciously explores notions of masculinity and a male point-of-view.

My wonderful editor at Knopf, Nancy Hinkel, recommended Tim Tharp, both Knights of the Hill Country and The Spectacular Now, along with a historical novel by Victoria McKernan called Shackleton’s Stowaway and a book about chess competition called Perpetual Check, by Rich Wallace.

The stack of books on my night table teeters at this point … but any other role models you might suggest?

This blog is on vacation next week. Next post will be February 22nd.
Posted by Maria Padian at 6:07 AM 2 comments: