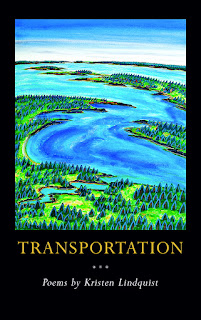 I love poetry. Love love love it. Volumes of poems teeter dangerously on my bedside table. I purchase mini-books of poems to carry in my shoulder bag so I'll have a few to read whenever I'm waiting on line somewhere. Old poems, contemp poems, laugh-out-loud poems and devastatingly dark poems (think: Robert Frost's "The Draft Horse." Yeah, even that one.) I can't get enough.

So I guess it's one of the tragedies of my writing life that I'm an AWFUL poet. Really, no false modesty here: my poems are abysmal. Unless you count limericks (which I don't, even though I can spin out any number of limericks on demand; a strange but useless gift) I am poetically-challenged.

Combine my enthusiasm with my lack of talent and you have: Poems for a Monday. Something new I plan for my blog. Every Monday (hopefully every Monday) I'll post a poem here with a little something about the extremely talented person who wrote it.

So here it is, the inaugural Poem for a Monday: Kristen Lindquist's "Transportation," from her collection of the same title, published by Megunticook Press, cover art by Eric Hopkins.

Everyone in O'Hare is happy today.
Sun shines benevolently
onto glorious packaged snack foods
and racks of Bulls t-shirts.
My plane was twenty minutes early.
Even before I descend into the trippy light show
of the walkway between terminals,
I am ecstatic. I can't stop smiling.
On my flight we saw Niagara Falls
and Middle America green and gold below.
Passengers thanked the pilot for his smooth landing
with such gratitude that I too
thanked him, with sudden and wholehearted sincerity.
A group of schoolchildren passes on the escalator,
and I want to ask where they're going.
Tell me your story, I want to say.
This is life in motion.
A young couple embraces tearfully at a gate;
she's leaving, he's not.
How can I bring this new self back to you, intact?
He yells to her departing back,
"Hey, I like the way you move!"
Any kind of love seems possible.
We walk through this light together.
So what if it's an airport?
So what if it won't last? 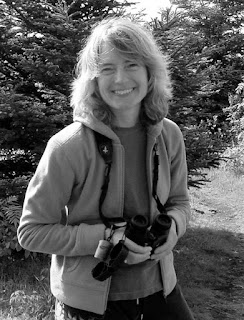 Kristen Lindquist lives with her husband Paul in her hometown of Camden, Maine, where she works as development director for Coastal Mountains Land Trust. She received her MFA from the University of Oregon. Her poetry and other writings have appeared in Down East Magazine, the Maine Times, and the Bangor Daily News, as well as various literary journals and anthologies. Her chapbook Invocation to the Birds was published in 2001 by Oyster River Press. An avid birder, she writes a monthly natural history column for the Herald Gazette.