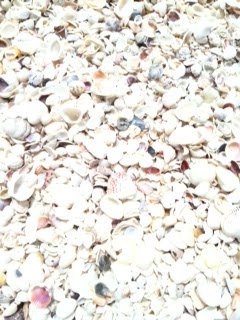 For a month, I’ve retreated to a slower rhythm.

We’ve rented a place on an island in Florida, and while we’re still working (thanks to the Internet/personal computers/WiFi) we look up from our screens to watch low-flying squadrons of pelicans, or take “study breaks” to bicycle to the grocery store for the very necessary limes and avocados.

I confess: I’m not getting as much done as I would have at home, where the latest snowstorm would have definitely kept me more securely fastened to the desk near the lovely woodstove in my office.  I’m learning that cold is a better inducement to work than palm trees.  But I have been getting a little help from some good old fashioned peer pressure:  namely, the writer across the lake.

Every morning, when I get up at what I perceive is the “crack of dawn,” his light already shines brightly from his kitchen and casts an arrowed reflection across the lake at our house.  Ringed by cottages and trees that don’t grow in , it’s a little lake, and you can easily see your neighbors.  That’s how I know he’s a “he,” and a writer.  I can see him sitting at a long table as he holds a pen/pencil and occasionally turns pages.  Plus, this island is infested with writers.  I only just learned that RandyWayne White, of the “Doc Ford” series, lives in this neighborhood (although this guy isn’t him.)

Granted, maybe the guy across the lake is reading the Miami Herald and doing the crossword, but I live by imagination so bear with me.  And if you’re wondering just how close these houses are and how a woman who can’t make out the directions on the pasta box without her reading glasses can see into her neighbor’s kitchen I’ll just confess again:  I took out the binoculars one morning.  I mean, if it’s okay to zoom in close to the herons and osprey and cormorants that populate the lake, why not the humans?  And yes, I would get more done on these new chapters I promised my agent if I spent more time writing and less time spying.  But I want to know:  who IS this person up before the light every single day?

My advisor in college, a poet, once revealed to our class that in order to get any writing done he was always at his desk at home by five a.m.  This guaranteed him a solid couple of hours of uninterrupted, quiet creativity before the maelstrom of young children and breakfast and packed lunches and heading out the door to begin his “workday” as a professor.

When you’re a 21 year old student, the idea of being at your desk, ready to work by 5:00 a.m., seems nightmarish.  Isn’t that still “night?”  It must be, since you only just went to bed two hours earlier ….  Why would anyone inflict that on themselves?

This image … of my advisor, padding about his silent, dark house in stocking feet so as not to wake anyone, brewing coffee, filling pages at a desk illuminated by a single lamp … stayed with me.  Possibly more than the advice on crafting sentences.  It spoke to commitment.  To a strange, near-obsessive need to fill pages, tell stories, make things up.  Willing to sacrifice sleep and salary (because except for the handful of bestselling authors, this DOESN’T make us rich) and endure criticism from strangers.

Sometimes, in the dark before first light, as I wait for the coffee to finish brewing and then for the caffeine to kick in, I don’t, I really don’t, want to open the file for wherever I left off the previous day.  Sometimes the words I labored over for hours clang upon rereading and I’m deeply, seriously discouraged and not at all confident that I can pull off another paragraph, let alone another book.

But then I look up and see someone’s else’s lamp burn, and it reminds me that doing this requires simply doing it.  String a few words together, fill one page, then another.  Return to the desk tomorrow.

Okay.  Back to work.
Posted by Maria Padian at 6:37 AM No comments:

Never Compete With a Blind Raccoon 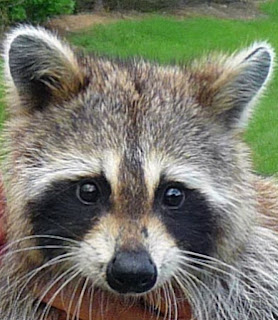 So with a brand new novel released last month, I’ve been scheduling “events” and signing books.  You do that, with a book just out.   Visit a few bookstores, attend a few readings and parties and scribble your name on the title page and thank everyone (quite sincerely, as a matter of fact) not only for showing up but also for shelling out for a hardcover copy.  It is truly amazing how grateful you feel when you see people … some who aren’t even your mother’s friends … fill the chairs at a reading or line up to purchase an autographed book.   You want to hug them all and invite them home for dinner.

In the years when I have a new novel out,  I gratefully accept invitations to sign books and speak on panels and visit schools and Skype … that sort of thing.  The reality of the writing business is that it’s not enough to simply create a book and let your publisher do all the promoting:  you have to be willing to put some energy into selling the work, too.

Of course, there are productive and not-so-productive uses of your time, and while I’m definitely no expert, this is my third go-round with all this and I do have one important piece of advice for newcomers to Authorhood.

Never compete with a blind raccoon.

I saw someone try. You don’t want to go there.

It happened just the other day, at Bailey’s Grocery Store on .  Bailey’s is one of those lovely local institutions which has been here forever and has this wonderful tradition of hosting local authors.  On any given day when you pop in to pick up a key lime pie or some fresh shrimp, there’s a table set up near the entrance, between the grocery carts and the display of freshly baked coffee cakes, where a hopeful novelist/artist/memoirist sits, surrounded by copies of his or her newly minted novel/memoir/picture book, signing pen at the ready.

It’s a tough gig.  People have certain expectations when they enter a grocery store.  They’re thinking about dinner and whether they’re out of toilet paper at home.  They’re not on a literary quest.  They’re not necessarily in the mood to make conversation … let alone eye contact … with some random writer peddling her work.  If you decide to do the author thing at Bailey’s, you have to be prepared to smile brightly at a lot of people who will walk right on by.  You can’t appear overly eager and grasping when someone pauses to ask if you’re selling Girl Scout Cookies.

Of course, all that changes if you bring a fuzzy animal.  Then, you can guarantee a mob.  That’s what I witnessed at Bailey’s the other day, when I wandered in for limes and had to navigate around a crowd of oohing cooing women and girls.

When I pushed in closer to get a look, I saw a woman holding the most adorable little raccoon.  He had his eyes closed, and was contentedly snuggled in her lap, which, if you know what absolute fiends raccoons can be, was a miracle.  He was, she explained, the hero of her picture book (displayed on the table behind her) and had been blinded when someone hit him with a golf club.  She subsequently rescued him, wrote a picture book about him, and the story had just won a state award for children’s non-fiction writing.  His name was Trouper.

I no longer have children of picture book age, yet I almost bought a copy; that’s how cute the little fella was.  I was in a hurry, yet I lingered, and longed to pet him.  What a champ!  What a “poster child” for the importance of kindness to animals!

And, of course, the writer in me couldn’t help but notice: what a genius idea!  Cute, fuzzy animal.  I would have to get one for my next signing.  Once I wrote a book about a cute, fuzzy animal ….

I spent so much time admiring Trouper, that now I was late.  As I sped off toward the produce I noticed something:  another author, on the opposite side of the baked goods display.  He was dressed island-author-smart-casual, with light stone khakis, sandals, and a bright print shirt.  He had neatly stacked copies of his books … murder mysteries set on Sanibel … and even a professional looking poster.  He paced, restless as a lion, behind the table where his work was displayed.

Not one single person approached him.  Not even me, and I understood his agony all too well.  Usually I stop by author tables, even when I have less-than-zero interest in the book, just to chat.  I'm also one of those people who search for friends' book in stores, and turn them, cover side facing, on the shelves.  But on that day, in a hurry, I didn't pause for the island author.  I know: shame on me.

But what folly!  Had he known?  Had anyone thought to tell him that he would be going toe to toe with Trouper, the most adorable disabled raccoon in the ?  Maybe he thought (in error) that the crowds drawn to Trouper might result in some traffic at his table?  Just the opposite occurred.  They used up their limited energy for grocery store authors with Trouper, then sped off to buy food.

Here’s what I’ve learned about signings:  unless you’re fairly well known and can draw a crowd, or bring a fuzzy animal, only schedule signings where you live, where your mother lives, and where your sister lives.  There, at least, they can coerce their friends to show up, and you can count on mom to buy a carton of books.

If you decide to go ahead and put yourself out there anyway, at random venues where you can’t guarantee an interested audience?  Well … you might want to keep a stash of Girl Scout Cookies handy.  Just in case.

Trouper’s story is real, and you can read more about him HERE
Posted by Maria Padian at 5:41 AM No comments: