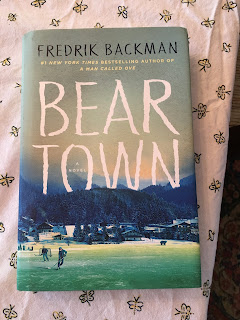 It’s not my idea. Anne Lamott, in her fabulous book on writing, Bird by Bird, taught me that the first rule of writing fiction is developing your characters.

Once you know who they are and what they want, the rest follows.

I was recently visiting a high school creative writing class in Freeport, Maine, pushing the “Plot Follows Character!” message (I should really emblazon that on a tee shirt … ) and that very night opened Fredrik Backman’s Beartown and WUMP! There it was. And so well done.

Beartown is the story of a down-and-out, rural town where hockey is practically a religion. The local hockey club wields a disproportionate influence on every aspect of life, hockey players are demigods, and because there isn’t much else happening economically the community’s fortunes are linked to one particular team’s success and the potential for attracting a hockey training camp to Beartown.

Fully the first third of the book introduces us to a large assortment of characters, from current teen players to their parents to local business owners to coaches, former players … Backman slowly fills in the various canvases of their personalities, their histories, their desires and fears, step by step, as if each were a paint-by-number. At times it felt like I was peeking into Backman’s writer’s notebook. You know, the place where we work things out? All the words we need to write as we get to know our characters? Of course, it wasn’t as rough as my notebook, which should never be read by anyone except me …

By the time the big game approaches, we can well imagine how each of these characters will react, win or lose, and what the stakes are for each. But of course, that’s not enough. We need higher highs and lower lows. So Backman throws a Molotov cocktail into the mix, and we watch what happens.

Well, PLOT happens. But it’s a plot that will unfold based on all the careful, intentional character details the author has given us. We know how each character will react and what he/she will do based on who they are, and what they want.

Folks have been urging me to read this book for ages because I wrote Wrecked, which dramatizes the aftermath and various character reactions to an accusation of campus sexual assault. Beartown’s Molotov cocktail is a rape: the daughter of the hockey club’s manager is raped by the club’s star player. Her accusation is made public the eve of the Big Game.

“Explosive” doesn’t go far enough to describe how the town’s citizens react. What’s so, so good, however, is that while we can’t PREDICT what each will do … when they do it, it makes sense. Because they’ve been so well-depicted from the beginning of the book. Our hearts break for them and we turn pages FAST, because we know these characters and we’re invested, we’re bought in, we care. Deeply.

As a novelist I’m mindful to read like a writer. Not necessarily with a pencil in hand, but with an eye toward craft, and how another novelist is pulling it off. I’d say Beartown is an outstanding example of Plot Follows Character.

I’m between my own novels right now, having just put copyedits on my latest to bed. I’m waiting for page proofs, which are always fun to read (it looks like a book!) but also SLOW to read because you check for mistakes and typos. I tend to review page proofs with a ruler under each line, and even read the sentences backwards … just to make sure nothing’s out of place. Excruciating, but necessary.