Feminism for the Way We Are Today 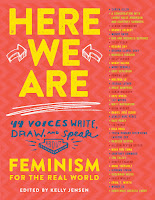 My only regret about Here We Are: Feminism for the Real World, edited by Kelly Jensen, is that it’s coming out just shy of my daughter’s road trip to Washington. She and a pack of college friends set off this weekend for the Women’s March, and I wish they had a copy to read aloud to each other on the multi-hour drive. This excellent collection of essays, interviews, and illustrations by a whole host of creative people, would no doubt make them laugh, make them cry, but most importantly: get some awesome conversations started.

It’s not a book my own mother would ever have given to me, and I think it’s important to explore why, especially at this juncture in our nation’s story, when a man who jokes about sexual assault, supports defunding Planned Parenthood, mocks the disabled, and goes after Civil Right’s heroes on Twitter is about to ascend our highest office. When so many women voted for such a man. And when so many young women … who don’t think twice about their myriad opportunities to play sports or their right to vote (even for Donald Trump) or head companies (like Hewlett Packard) or run for President, thanks to the outspoken, fearless women who fought for those rights …   are reluctant to think of themselves as feminists.

I think I can understand why. I grew up in a home where feminism, while not quite a dirty word, was a suspect term.

I won’t elaborate on the reasons … it involves a story which is not mine to tell … but my mother had a whole lot invested in embracing traditional, 50-s era values. Ironing while watching the soaps, cookie baking, child-rearing, preparing mouth-watering dinners for her tired man when he came home from work at the end of the day, scrubbing her house until it gleamed … these were her priorities. Frankly: she did it all well and took great satisfaction in that work and her goals. Both my parents were devoted to each other and to creating a family.

But while she was juggling babies and cloth diapers and all that cleaning, the 60’s and 70’s raged. I remember watching John F. Kennedy’s funeral cortege on the black and white television, the coffin draped with an American flag. (I was very young and reportedly asked, “Why did they bury him in a watermelon?”) I remember the evening news death counts of U.S. troops in Vietnam. I remember thinking the “big kids” who went to our local high school and had long hair and beards drove too fast. Cities were burning, both in protest and by landlords eager to collect the insurance on dilapidated buildings, college students were getting shot at Kent State, black kids were linking arms and getting their heads bashed in by cops bearing batons.

To my (very young) parents, it must have felt like a fraught time to raise a child, and my mom circled her little family wagon with an insistent vision more akin to The Adventures of Ozzie and Harriet than what was happening on the evening news. It was a vision that required constant vigilance, and did not allow for radically different ways of being or seeing. Anything that shook things up was threatening, and the so-called “feminists?” The Gloria Steinems and Betty Friedans of the world? They were man-hating, loud-mouthed bra burners. They threatened a status quo to which my parents aspired.

But there’s more to it. I think my mom’s aversion to feminism had much to do with a sense that their club didn’t need … or want … members like her. She was a Spanish girl from the city who didn’t go to college. She never left the house without her makeup. She prided herself on her cooking. She’s Catholic. And if she had a sneaking suspicion that the leaders of the feminist movement were white girls who attended elite Seven Sisters colleges and went on to marry Ivy League lawyers while making cracks about women who stayed home to bake cookies and “stand by” their men … well. She would have been right.  So to this day, my assertive, smart mother who never hesitated to speak her mind, who sent her daughters to college, who balanced the family checkbook and managed the finances, and who, after she raised her kids, worked in an office and became the assistant to the President of a Fortune 500 Company, would never, ever, call herself a feminist.

If only she’d had this book. The opening pages of Here We Are breaks open the whole notion of what a feminist is:

Feminists come in every shape, size, form, and background. What unites feminists is the belief that every person – regardless of gender, class, education, race, sexuality, or ability – deserves equality. This is a movement about embracing differences and encouraging change that benefits all facets of society. This is a movement about listening as much as it is about speaking up.

Who could argue with that?

What I love about Here We Are is that is shows that feminism’s tent is HUGE. (Yes: let’s take back that word.) It has room for mothers and room for women who choose to not raise children. It has room for couples who marry and couples who don’t and people who prefer to remain un-coupled. It has room for girls who speak their truth and don’t aspire to be “sweet” (Courtney Summers, author of All the Rage, has a terrific essay here about writing so-called unlikeable characters.) It has room for a curriculum which includes artists and writers and musicians of all genders and ethnicities (Nova Ren Suma has a heart-breaking essay in this collection about Reading Worthy Women.) Here We Are shows us a feminism which is expansive and inclusive and as a result, liberating. For everyone.

It also demonstrates how feminism has evolved. The beginning of Here We Are defines the various “waves” of feminism, all of which were necessary for their time. And while I’m reluctant to call the depiction of the movement here a kinder, gentler version of 60s-era feminism, it does reflect a natural growth which was always about basic values of fairness and equality. It’s a movement that has made great strides but doesn’t rest. It’s a movement which is finally mature enough to legitimize all women’s work and all women’s choices, paid or unpaid, professional or home-based. And it includes men. As it turns out, the most important feminist in my life has been my husband, who bought me my first copy of Our Bodies, Ourselves, and who, when I met him at age 23, was the caregiver for his disabled mother.

Near the end of the book, the editor poses the question: Why do people dislike feminism? The answer:

For people who have power in society, being questioned about that power or being forced to examine their biases or prejudices incites fear. … Feminism begs all people to think about the social, political, cultural, and economic power we have based on our sex, education, gender and a whole host of other statuses we may or may not choose to have.

My daughter graduates from college in two weeks. Right after that she moves to the city and begins her first job along a career path she is incredibly excited about. In addition to linens and furniture and all the “stuff” she’ll need to set up an apartment, she’s bringing the new mixer she got for Christmas because, like her grandmother, she loves to bake.  She’ll also be bringing this book.

Here We Are: Feminism for the Real World is published by Algonquin Young Readers. It was originally planned for release on 2/28 but you can preorder it on Amazon and receive it by late January.
Posted by Maria Padian at 11:28 AM No comments: