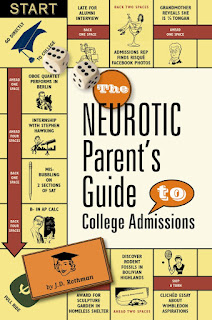 We recently had a ceremonial burning at our house. In the backyard, one of those fire dishes: into it we dumped Fiske's and Barron's. US News and World Report's Guide to Colleges. Stacks upon stacks of glossy brochures featuring picturesque campuses across the country. Yeah, I guess we could have recycled all that paper, but it felt good ... it felt necessary ... to burn it.

Because our last and youngest child, a senior in high school, has been accepted to college and is bound to leave the nest come September. And all of us in our family can now breathe a collective sigh of relief as we leave the oh-so-fraught-and-stressful world of college admissions behind.

If a backyard fire isn't in your cards, you might want to check out this book by J.D. Rothman. The Neurotic Parent's Guide to College Admissions, and this author's blog, have provided me with a few of the best laughs I've had in a long time. It's a much-needed antidote to the INSANITY which surrounds the current college admissions process ... and Rothman should be applauded for her honesty and self-deprecating sense of humor.

She's been on a book tour recently (The Neurotic Parents Guide only just launched) and shared with me a few answers to questions about her work and her experience as a college-touring parent:

The Neurotic Parent started as a blog. Did you plan from the beginning to write a book about your experiences as a helicopter mom?

I never thought of myself as a helicopter mom. In fact, I was usually the one who forgot to pick up the entire carpool. And I have still never checked my kids’ homework. But when my son was a junior, I discovered the website CollegeConfidential, where most kids who post have invented an antibiotic by the age of 15. That convinced me that a little hovering was in order, and when one of the soccer moms heard that we had planned an eight-state college tour, she encouraged me to blog. But I never imagined that the blog would become a book…or even that anyone would read it at all. It went viral on the day I posted about the ugly bedspreads at Cornell’s hotel school.

How did you find the time, given your demanding day job as an Emmy-award winning writer and lyricist for children’s programs?

Blogging is actually a fantastic form of procrastination – once you figure out how to insert hyperlinks, you get to enjoy the process of writing – no deadlines, no page one rewrites, no wacky network executives giving notes. It does cut into my online Scrabble time though.

How much of the book is based on real-life experiences?

Everything about my obsession with linens for the college dorm is 100% true. Other parts might be somewhat embellished.

You’re a Brooklyn native who now lives in Santa Monica. Do you think the process differs from one coast to the other? And in between?

Luckily, as far as I know, Kumon for preschoolers does not yet exist here. But we do have plenty of community service. Just about every high school student I know has founded an orphanage in Fiji.

A recent task force has determined that a city’s level of neurosis is proportionate to a) the percentage of kids who wear hoodies to alumni interviews and b) the cost of the SAT and ACT tutors. New York kids all own a presentable outfit. And top tutors there are $1200 per session, while L.A’s are a mere $990, so that gives New York the edge in neurosis.

Both of your sons are in the book (as CJ, Cerebral Jock, and GC, Good Conversationalist). How do they feel about being discussed publicly?

CJ is unconcerned about all the anecdotes because like most kids, he doesn’t read, and hasn’t yet gotten through the blog or the book. But GC went to a journalism camp last summer, then poured over the galleys, instructing me to remove all references to him and his friends. For that reason, I focused mostly on the meals during his college tour, rather than his adverse reactions to smug tour guides we met on the trip.

What is the single craziest thing you encountered while researching the book?

Other than the factoid that George W. Bush had a higher SAT score than Bill Clinton, the most mind-blowing discovery was about the college prep centers in China...prep for American colleges, that is. One company will market, brand and package your child for $15,000. They create fake awards, change kids’ grades and even write their essays, making sure to leave in a few spelling errors so they’ll look authentic.

What sanity-preserving advice do you have for parents who have teens going through the admissions process?

Love thy safety. Help your kids find a school they’ll be happy to attend that will definitely admit them - even if their essay is about killing cats.

You’ve become quite an admissions expert. What are your Top Ten Admissions Tips?!

1. Lots of Mozart and flash cards in utero.
2. Drive over the border to Mexico to give birth.
3. Start your child in an unusual extracurricular, like organic kale farming or atom splitting, before preschool. Don’t even consider piano or T-ball!
4. Move to North Dakota or Montana before middle school (or just rent a trailer) so you can have a zip code from an under-represented state.
5. If your teen doesn’t mind getting up at 5:00am, and likes icy water, consider crew – a favorite sport of college recruiters.
6. If your teen hates a school because of the tour guide’s shoes, don’t force her to apply.
7. When colleges say they like to see an “upward trend” in grades, they’re not talking about going from C’s to B’s.
8. Have several extra T-183s around the house, so you don’t have to go calculator shopping the night before the SAT.
9. Don’t use the word “heretofore” in the essay – a dead giveaway that an adult helped….and please avoid the pronoun “we” throughout the process.
10. Make sure the development office is aware of your great uncle’s foundation.

Do you have plans for a follow-up project? Any hints on topics?

I doubt if I will find any humor in empty nesting, so instead I’m working on the Broadway musical version of the book. Or if I can make a deal for an edition in Mandarin, I won’t have to work again. 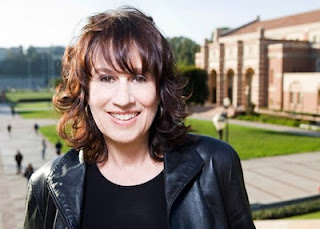 J.D. Rothman (The Neurotic Parent's Guide to College Admissions) is the blogger at The Neurotic Parent; her blog posts also appeared in I'm Going to College, Not You (St. Martin's Press). A New York native and Santa Monica resident, she is also an Emmy-winning screenwriter and lyricist specializing in children's literary adaptations. She has successfully guided two sons through the college admissions process, and they're still speaking to her.