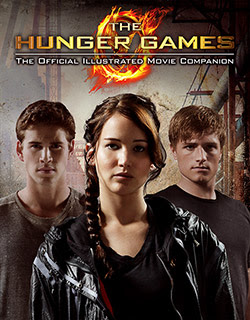 There must be something in the water in my town (Brunswick, Maine) because you can’t throw a stick without hitting a writer. Seriously, there are sooooo many writers in this town! And I’m lucky to know a few of the very coolest … including Kate Egan, who, in addition to being a prolific writer (she’s authored about 50 books for kids) is the editor of The Hunger Games.

Yes. Imagine it: Kate worked directly with author Suzanne Collins and was on hand, advising and commenting, as Suzanne revised and improved her drafts of The Hunger Games. Then, when the book was turned into a film, Kate was hired to author The Hunger Games: Official Illustrated Movie Companion and The World of the Hunger Games, which has just made the bestsellers list!

Hard to imagine that she’s also a mom in sleepy Brunswick … but being a mom has led to further creative endeavors, because her first picture book, Kate and Nate are Running Late! (a humorous tale about getting ready for school in the morning) is due out soon.

I had a chance to ask Kate a few questions about her work and, of course, the movie:

You’ve just returned from The Hunger Games premiere! What was that like?

The premiere was just amazing. I don't know how else to put it! It was the first time I'd seen Hunger Games fans up close, really seen their dedication to the books and the characters, really felt their excitement. The night before the movie, there were hundreds of kids camped outside the theater, hoping to get the handful of free tickets that would be available for them. They were curled up in sleeping bags, reading battered copies of the books, wearing t-shirts declaring their dedication to Peeta or to Gale. The Hunger Games logo kept coming up on giant video screens around the theater, flaming mockingjays everywhere... it was bigger than anything I'd imagined. It was astonishing to see the throngs of people waiting to see the stars next day. Just like in the movies! After seeing the film, I know that I will always picture Jennifer Lawrence as Katniss now. She's that good.

How did you feel the filmmakers did creating Panem?

Because I wrote the Official Illustrated Movie Companion (a New York Times bestseller!) I'd had an advance peek at many of the scenes. But seeing still photographs was very different from seeing it all come to life on screen. I was really moved by the way District 12 is portrayed in the movie. It is desperately poor, but it's Katniss's home, and it is wrenching to see her leave it. The Capitol scenes are dazzling and weird, which I mean in the best way. Every detail shows that the place is twisted and baffling. Like Katniss, you don't want to spend too much time there.

I'd say that my job is to ask Suzanne questions, to probe for details that might be in her head but haven't yet made it onto the page. She is a phenomenal writer, and sometimes she pushes back on editorial suggestions, and I trust her judgment. I have learned an enormous amount about writing from her. And Suzanne and I worked very closely with Scholastic's David Levithan on the books. He is a phenomenal writer and editor himself. 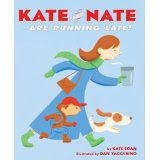 Tell us about your new picture book.

It's my first original book -- the first that wasn't assigned to me as a writer for hire. It took me a while to make that leap! It's a picture book called Kate and Nate Are Running Late, illustrated by Dan Yaccarino (an artist my kids have grown up loving). It's a funny story about a family scrambling to get out the door in the morning. There will be many back-to-school books out there this fall, but this one shows what getting ready for school is REALLY like. At least at my house... 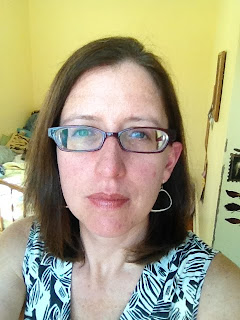 Kate Egan has worked in publishing for almost twenty years, both as an editor and a writer. The first book she edited was 99 1/2 Animal Jokes, Riddles and Nonsense (which still makes her laugh), and the first book she wrote was Pony Party (featuring My Little Pony dolls at a celebration). More recently, she has edited the novels in the Hunger Games trilogy, and her first picture book, Kate and Nate Are Running Late!, will be published this fall by Feiwel and Friends. Kate lives in Brunswick, Maine, with her husband, two kids, and two cats.
Posted by Maria Padian at 6:07 PM