I’ve been posting about my summer reads on Instagram but that doesn’t do these fab books justice. So … here’s what I’ve read so far, what I’m enjoying now, and what’s on deck. Check it out and let me know what YOU’RE reading, I’m always looking for recommendations. 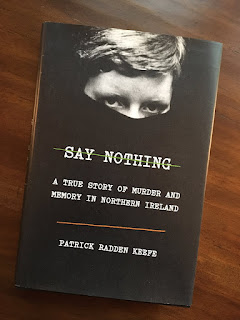 You’re probably thinking, “Way to keep it light, Maria,” when you see this scary black cover, and okay fine, this one is anything but light. But it’s sooooo gooooood! Say Nothing: A True Story of Murder and Memory in Northern Ireland by Patrick Radden Keefe is a must-read if you like history, especially Irish history.

Focusing on the 1972 murder and disappearance of a young Belfast mother, Jean McConville, Say Nothing examines the conflict in Northern Ireland by using the mystery surrounding her death as a starting point. It’s history, but reads like detective fiction. Many of the players in this drama I recall from reading news accounts at the time, but Keefe brings them to life so that they pretty much leap off the page. You won’t want to miss this one. 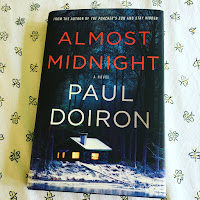 Moving on to an actual detective story … Almost Midnight by Paul Doiron is a Maine-must-read for summer. It’s the 10th in his Mike Bowditch-crime-solving-Maine-game-warden series, I’ve read them all and this might be one of my favorites. Paul is a native Mainer, a registered Maine guide, the former editor of Down East Magazine and a damn good writer. He tells a great tale and writes about the Maine woods so, so well. His descriptions are spot-on and beautiful and his fast-paced, wonderfully plotted books a lot of fun. His characters are NOT the stuff of “The Way Life Should Be” promotional brochures, so pick this series up if you want a peek at a grittier side of Vacationland.

In June my publisher, Algonquin Young Readers, hosted a group of us at the ALA (American Library Association) Convention in Washington and I got to meet my fellow #FierceFightingGirls Fall 2019 authors. We all have books featuring strong female protagonists coming out this fall, so we celebrated their spirit at a fun gathering with librarians and other Algonquin authors/staff. 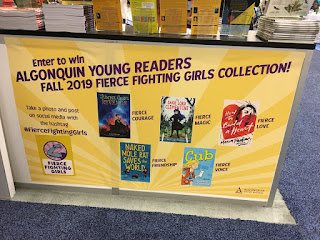 Anyhow, while at ALA, in addition to signing lots of Advance Copies of How to Build a Heart, I picked up a stack of new middle grade and young adult novels. The first one I read was In the Neighborhood of True by Susan Kaplan Carlton. 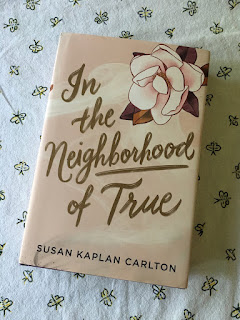 Set in 1950s Atlanta, Georgia, this novel is based on an actual hate crime which took place in that city. It’s about a Jewish girl and her family who move to Atlanta following the death of her father … and her struggles to fit into a cadre of wealthy, well-connected young people who don’t socialize with Jews. It’s a fascinating peek at a culture and a time period gone by, with a dash of romance (and plenty of pastel dresses) thrown in to lighten things up. Thing is: beneath the lovely manners and the beautiful clothing lives some ugly truth, which the book does a good job of exploring. 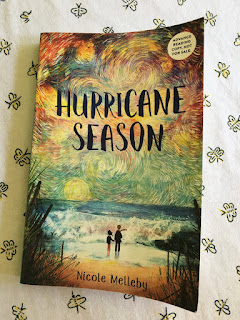 My favorite-summer-cover is hands down Nicole Melleby’s middle grade novel, Hurricane Season. Honestly, sometimes while reading I’d just close the book and stare at the cover! So gorgeous. And so perfect for the story (hint: if it reminds you of a Van Gogh painting, you’re on to something!) It’s the story of Fig, an 11-year old who lives alone with her father, a gifted musician/composer who struggles with bipolar disorder. Her mother left them right after Fig was born (!) and it’s been up to Fig to keep their lives in order whenever her dad has bad periods.

I’ll confess: this one made me cry. It paints a convincing picture of how a child must feel if the “responsible” adult in her life is mentally ill. My heart was broken for Fig, and I felt her fear and confusion. There are also some LGTBQ elements to this story (Fig has feelings for another girl; her father falls in love with the man next door) but to me the mental health theme of this book was the most resonant. 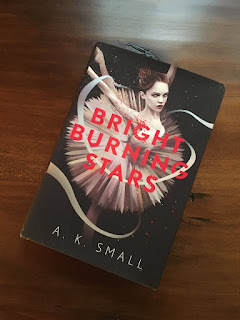 Speaking of gorgeous covers: check out Bright Burning Stars by A.K. Small. Pow, right? I can’t stop staring at it. Better yet: the words behind that cover.

Set at a highly competitive ballet school in Paris, this is the story of two best friends, Kate and Marine, who are vying for the same coveted spot in the company’s corps de ballet. When the body of a student is discovered, dead, early in their final year, the girls are forced to confront the question which has been percolating since they began their training: how far would you go to achieve your dream?

As someone who loves ballet but can scarcely touch her own toes, I’m fascinated by this world and in awe of what ballerinas can do with their bodies. My second novel, Jersey Tomatoes are the Best, features a girl attending a competitive ballet school, and one of the things I did while researching was slip on a pair of pointe shoes and try to go on pointe.

Oh. My. God. Such pain. How do they do it? It made me understand why ballet dancer’s feet are practically deformed.

Author A.K. Small is a dancer herself, so she writes what she knows and does it so well! I’m still reading this one, but please: if you know a teen reader who’s interested in dance, hand them this one. 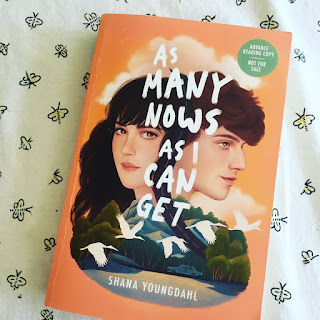 Finally, “on deck” is As Many Nows as I Can Get, a debut young adult novel from Maine author Shana Youngdahl. Shana teaches writing at U. Maine Farmington and this novel, which launches in August, is getting pretty good reviews. It’s described as “a timely, searing, and unconventional romance,” so … I’m in!

Stay cool and read on, folks! And let me know what else is out there I don’t want to miss.
Posted by Maria Padian at 8:17 AM No comments: