Our Right to Read

Imagine going into your public library to pick up a copy of Mark Twain’s The Adventures of Huckleberry Finn, only to find that it’s not available. Not because another patron has taken it out: because it’s been removed from the shelves. Permanently.

Maybe you’re not the questioning sort, so you figure what the heck, I’ll just find another classic … how about … F. Scott’s Fitzgerald’s The Great Gatsby? But then you discover that’s missing, too. Disappeared from the collection and struck from the catalogue.

The list goes on: John Steinbeck’s Of Mice and Men. Harper Lee’s To Kill a Mockingbird. Even Harry Potter is gone. Hemingways are missing. Nobel prize winners (I’m thinking of Beloved by Toni Morrison, one of my all-time favorite books) are not to be found. Heck, you can’t even find a decent Jodi Picoult novel (although they’re readily available at most airport bookstores.)

If this scenario seems ridiculous and unlikely let me tell you: there are people in our country who are actively working to make this a reality. Every book, and every author I’ve mentioned here, have been targets, numerous times, of book banning. If you don’t believe me, ask the American Library Association. This is National Banned Books Week, and the nation’s librarians have a lot to say about our national right to read.

Just last week this issue raised its ugly head. A fellow named Wesley Scroggins out in Missouri called upon the powers-that-be in the Republic, Missouri schools to ban Laurie Halse Anderson’s young adult novel, Speak. He described it as “soft pornography.” He objected to the novel’s portrayal of dysfunctional families and insensitive teachers. I don’t know … I guess he thinks authors should only write about happy families and classrooms run by the Teacher of the Year?

Speak is a moving, empowering fictional account of a girl who is raped the summer before her freshman year in high school. She is emotionally scarred by this event, to the point where she can barely speak. It’s a story about how she ultimately deals with her attack and finds her voice again.

It’s not easy to read. But it treats, sensitively, an important topic. The author has received countless letters from girls, thanking her for writing this novel, which helped them cope with their own sexual assault traumas. When I read this book it confirmed my own decision to write for teenagers. It’s possible, through fiction, to touch young readers in ways that help them, and move them. Laurie Halse Anderson is one of our best YA authors out there.

Luckily, there is an army of teachers, writers and librarians out there ready to take on the Wesley Scroggins of the world, and while the citizens of the Republic, Missouri school district still haven’t taken any action regarding Speak, they’ve sure heard from a lot of people who strongly approve of the book. Librarians, especially.

And if there’s one thing I know, Wesley, you don’t want to make a librarian mad.

Every day this week, in honor of Banned Books Week, I’m going to recommend a recently banned Young Adult title. Thanks to Wesley, I’ll start with: Speak.
Posted by Maria Padian at 6:50 PM No comments:

Here’s my favorite metaphor for writing: it’s like driving on a foggy night with the headlights on. You can only see a few feet in front of you, but if you keep on driving and focus on the road ahead, you eventually reach your destination.

I’m one of those writers who knows the end of my story from the outset, so driving in the dark with a destination in mind is the perfect metaphor. When I’m in the thick of it, plowing steadily forward through a new book, the only thing that keeps me on track when it all feels too big or too much to write, is the road before me. I focus on the scene on the immediate page: the particular word to describe the tables; the smell of the place when the character walks through the door; the color of her hair.

Then, some damn fool steps in front of the car, waving his hands.

We’re not talking about a distracting bystander, or a sketchy hitchhiker one can easily justify whizzing past. Oh, no. This dude steps in front of the moving vehicle. Go on, hit me, he dares. Or, do the unexpected thing, the risky/brave/out of the box thing, by pulling over, and letting me in.

I’m currently writing my third novel, and for the third time this has happened. And if past experience is any indicator of what’s to come, if I let this stranger in, I’m in for a ride I didn’t expect.

In my first book, Brett McCarthy: Work in Progress, the guy I picked up was Mr. Beady. He walked into the story as a minor, random octogenarian who was friends with the main character’s grandmother. A few chapters after he got into the car, he was practically a member of the family. He was an important foil; a source of great comic relief; and ultimately, a hero upon whom a major plot development hinged. Who knew, when he showed up for dinner one night carrying a bag of corn chips, that he’d be there for the climax?

In my next book, Jersey Tomatoes Are the Best (March 2011), I began with a single narrator, a girl named Henry, and before I knew what was happening her best friend was elbowing her way into one scene after another. When Henry made plans to travel to Florida and leave her best friend behind, I commented to my daughter, “My editor isn’t going to like this. The best friend is about to disappear.” My daughter, who at 16 has way better instincts about writing than her mother, disappeared into her room, returned with an armload of books which she tossed on my bed, and said, “You need a two-narrator novel. Here are a few good examples.” The final version of Tomatoes is told from two alternating points of view, and the twin “voices” in the book are an important theme.

And now, I’m back in the driver’s seat, this time cruising with my narrator through Lewiston, Maine, and I’ve taken him to a strange little place where I planned to introduce him to a girl … when another girl walked in. She’s short. She’s got a gold stud in her nose and blue eyes that my narrator says “unnerve” him. I’d planned to have her show him into the other room, then leave, but then … he followed her. I realized he’s going to follow her further, beyond the other room, all the way to the end of the novel. I don’t know where she was when I was outlining this book last winter, but a couple of days ago she arrived, standing boldly in the headlights, waving her arms ….

I think I have to let her in. And see where the journey takes us.
Posted by Maria Padian at 2:59 AM 2 comments: 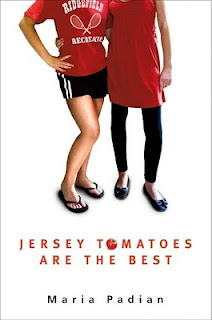 A writer friend urged me to celebrate every little good thing in this business because there are always plenty of bad-writing-days and setbacks to discourage us. I've taken her advice to heart, and often pop open a nice bottle of wine on evenings after I've completed a new chapter, or heck ... even written a decent paragraph. If several writing friends have had good news ... a manuscript sold, a good review, a productive day of writing ... we like to get together for a mini celebration.

So I guess right now it's a champagne moment, because not only has Knopf released this wonderful cover for my next book, Jersey Tomatoes Are the Best, but a talented young man (Jasper Lowe of Thompson Street Productions) has just completed a book trailer for the novel. These are very "big" good things, if you ask me.

They are also time consuming things which, frankly, have very little to do with the actual process of putting words on paper and writing a story. Jasper and I went round and round discussing small details, correcting typos, tracking down the right "actresses" for the video and the right person to do the voiceover. Everything takes longer than you think it will, and before you know it you're spending a LOT of time promoting a book instead of writing one.

When I write, I have to sink down into the world of the story and shut out all the ambient noise of my "real" life. I can't answer the phone or think about errands or make out the grocery list, and I have to set aside HOURS to read passages out loud and "get" my narrator's voice in my head. I'm trying to find a metaphor for this place where I have to travel, imaginatively, and I guess I can most closely liken it to stepping into a padded, soundproof box, alone, and waiting for a video to begin playing.

Facebook, Twitter, press releases, book trailers, blogging, author signings and appearances are diametrically different activities. What's more, the type of person drawn to the latter seems awfully different from the type who enjoys the former. How are we supposed to do this, authors in the brave new world of social media? It seems to require a split personality, at least professionally.

I asked author Robin Brande, who has published two young adult novels (Evolution, Me, and Other Freaks of Nature; Fat Cat) how she balances her role as writer with her role as marketer and she said after wrestling with the topic herself and asking other writers what they advise she's concluded that the most important thing for her to do is write the next book. She said adding a hundred followers on Twitter is much less important than making sure the book she's working on is the best it can possibly be. Sure, we can't ignore social media, and we can tweet and blog and friend a bit ... but the lion's share of our energy has to be directed at the next book.

So ... Jersey Tomatoes won't be out until March, 2011, but check out this wonderful video which Jasper Lowe created for it:

I'm going to sign off, and return to my padded writing cell.
Posted by Maria Padian at 12:26 PM 1 comment: