The Death of Little Pinkie

We were only three hours into Lent when The Daughter killed Little Pinkie.

The opening scene: 3:00 A.M., Ash Wednesday. The Husband and I are in deep sleep. Sorry to mix the seasonal metaphors, but “visions of sugarplums” were definitely dancing in our heads.

Then, the phone rings.

The phone ringing in the dead of night is never heartwarming. At the least: it’s annoying and ruins your night’s sleep. At the worst: someone is dead. Or in distress. Deep distress. Because no one (!) would call you at that hour unless there was a big problem.

As the parent of adult children who live in cities far away from us, the Dead of Night Phone Call is particularly dreadful. Several times now it’s been The Son, who lives in Los Angeles, where for very good reason the car insurance rates for young men in their twenties are the highest in the nation. (I cannot tell you how anxious it makes me to think of him driving on the L.A. freeways. I try not to think about it, which helps. Denial is not just a river in Egypt.) Thankfully, those calls from The Son, while they all involved car trouble/accidents did not involve death or injury.

Last night, however, The Daughter called. It was the wee hours of Wednesday, she had work the next day, and she was home in her apartment. The first thing I thought was, “Fire?”

But no: it was a clumsy accident. She’d gotten up from bed and knocked over a glass of water on her nightstand. It spilled everywhere … including onto her laptop. Her brand new Mac, which she’d purchased in pink. Affectionately dubbed Little Pinkie.

Initially, Little Pinkie appeared unharmed, and fired right up when she opened it. But after drying off everything else (I won’t detail how far the deluge extended) she noticed the screen had gone black. And eventually Little Pinkie failed to charge.

Query: why a call to mom and dad in Maine at this point? But after googling on her iPhone What to do when you spill water on your laptop? and not coming up with much besides burying it in a Tupperware filled with dry rice she resorted to us. And after crashing over each other to find the phone in the dark, and taking a few calming breaths once we realized no one had died, we also suggested rice. Which was not helpful. Apparently no one in that apartment really cooks (she and her roommates excel at takeout) and there was no arroz to be found, something I find fairly incredible but that’s another story …

We talked through strategies for resuscitating Little Pinkie, finally settling on going back to sleep (!) and hoping a visit to the Genius Bar at the Boylston Street Apple store the next day would help. But when we hung up I could tell The Daughter still felt terrible. Purchasing this computer required no small chunk of change from her just-out-of-college budget, and she panicked, wondering how she would complete her grad school applications and meet various other professional requirements without it.

Several hours later: dawn. I stumble from bed, make coffee. Heavenly coffee. I pull out my schedule for the day, which includes 1. Working on my latest novel; 2. Collecting and delivering the evening meal for the local homeless shelter; 3. Walking the dog; 4. Hearing back from The Daughter re. Little Pinkie; 5. Buying some of my husband’s favorite candy from Wilbur’s Chocolates and sharing a fun Valentine’s Day dinner with him; 6. Getting ashes.

Because today is Ash Wednesday, the first day of Lent. The kickoff to the season of repentance and getting one’s spiritual house in order, the six-week lead up to Easter, which is the culmination of All Things Christian. At some point today I’ll go to church where a priest or other minion will smear greasy black ashes on my forehead and intone, “Remember man/woman that you are dust and unto dust you shall return.”

I’ve always found Ash Wednesday to be grim. Yes: we know we’re all going to die and rot some day. What of it? Should we walk around with our heads down waiting for the meteor to strike, or a truck to ram us on the highway? I’ve always found the practice of ashes to contain a veiled threat: Behave. Judgment is around the corner.

For some reason, as I was pouring coffee this morning and contemplating the day ahead, a different thought occurred. It was somewhat Mary Oliver-inspired, more What do you plan to do with your one wild and precious life? and less hellfire-and-brimstone.

To contemplate my life in ashes is to put everything in perspective. It’s not a death sentence: it’s a gift. Because every moment I’ve got on this side of the game is an opportunity. To write another book. To eat chocolate with my husband. To speak with my daughter on the phone, albeit at 3:00 A.M. To have a car that works and the wherewithal to bring hot food to people who need it.

Ash Wednesday is not a threat of impending doom. It’s a reminder that life is precious. And while we can’t control much of what happens to us, we can control how we respond to it, and choose how we want to live. With fear, dread and panic … or joy and optimism?

Onward! My agent, Edite Kroll, likes to conclude our conversations and emails with the invocation, “Onward!” I love that. It promises good work and progress ahead. With that in mind, I called The Daughter. She was already at work; she’d gotten an early start so she can clock off early and get to the Apple store.

“You know, a computer can be replaced,” I told her. “You’ve saved your important documents. You aren’t hurt. You have a job and a good place to live. This is an inconvenience. A blip.”

Before we ended our call I inquired after the computer. It still refuses to respond to the “on” button.

It appears, at this point, that The Pink is no more. We’ll see what the geniuses say. We'll figure it out. Meanwhile: onward!

Posted by Maria Padian at 6:59 AM No comments:

In the Stack, On the Page, On the Road

The other day I posted this picture on Facebook:

It’s my current reading/just finished/next in the queue stack, and it elicited an exciting round of comments and book suggestions. (Yes: I’m one of those dorks who find a reading suggestion “exciting.”)

I have a strong love/hate relationship with Facebook and social media in general but if I can use it to promote books and authors and learn about great reads then, I’m in. So, at my sister’s suggestion, I’m going to post a monthly What’s In The Stack update to see what you all are reading and share what I’ve enjoyed. You’ll find it here on the blog, and also on my Facebook and Instagram pages.

My latest love is the young adult novel “Disappeared,” by Francisco Stork. It’s set in Juarez, Mexico, and is the story of two young people (a brother, Emiliano, and sister, Sara) trying to navigate the deadly violence of that city. It’s about choices, values, survival, friendship, and love. Yes, all the biggies. But in Francisco’s capable hands, all is possible. 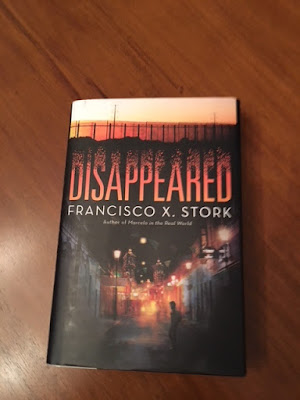 Okay, so now please imagine I’m standing on top of a high building yelling: “READ THIS BOOK! GIVE IT TO YOUR TEENAGERS!!”

Fiction begins with character. Great fiction is routed in the empathy an author has for a character, and conveys, dramatically, on the page. In all his novels (and if you haven’t read them, I encourage you to visit the website link provided above and at the very least read “Marcelo in the Real World” because it’s all of the wonderful) Francisco inhabits the beating hearts of his characters, and as a result Emiliano and Sara’s wrenching choices come alive for us.

I won’t spoil this book by saying too much except to add: we cannot engage in our nation’s current debate about immigration/the Wall/deportations without fully understanding all the complexities which would prompt families to risk their lives crossing a desert in order to come to the U.S. “Disappeared” gives us a snapshot of very real people negotiating a very dangerous world, and it’s a timely, important book that could spark great conversations among teens.

Okay, meanwhile, it’s been cold and snowy here in Maine which I love because 1. It’s much more fun to snap on the cross country skis and head out to the trails with the dog instead of trudging along salt-and-silt-strewn roads for her daily walk, and 2. I’m on deadline for a new novel and these days are THE BEST for staying indoors and writing. Think: woodstove. Coffee. The silence of snow.

And speaking of writing: Algonquin Young Readers has contracted with me for a new novel! I’m guessing it’ll be out in 2019 … ? I’m thrilled/so happy/incredibly blessed to 1. Have a wonderful agent, Edite Kroll, who connected me with Algonquin and 2. be working once again with the Algonquin crew, esp. editor Kristina Lypen. That’s all I’ll say for now because this WIP doesn’t even have a final title yet …

FINALLY, speaking of snow: next week I’ll probably be grousing about it, because I’m hitting the road and heading to magical Mt. Desert Island for a book talk in Bar Harbor and school visit at MDI High, all thanks to the fabulous Island Readers and Writers. If you’re in the area, please stop by! 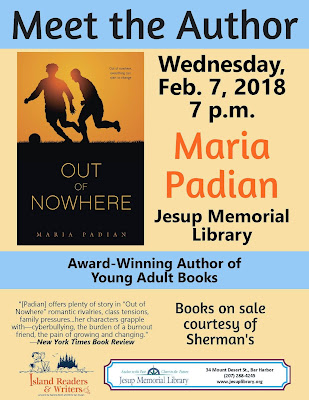 Posted by Maria Padian at 6:13 AM No comments: