Around this time last year The Dude (see blog post May 3rd for more on The Dude) was waiting to hear from his first choice college and feeling fairly nervous, and among the many random things I said to distract him from the omnipresent nervousness was, “The Fosters are having steak and lobster for Thanksgiving Dinner. They don’t like turkey. Can you imagine that?”

I fully expected The Dude to chuckle politely at the Foster’s expense, but instead he exclaimed, “Cool! Can we do that? I hate turkey.”

Appalled. Dumbfounded. Horrified. And those were just my initial reactions.

“What sort of American are you?” I sputtered. “It’s downright unpatriotic to reject turkey on Thanksgiving. What would Ben Franklin say?”

“He’d say, ‘Dude, you’re right. Save a turkey; eat a bald eagle.’” he replied. The Dude is a bit of a history buff, and he was correct: Ben Franklin fought hard for the turkey to be our national bird, not the eagle.

“Ben Franklin lost that debate,” I continued. “That’s why we eat turkeys on Thanksgiving. It’s practically a requirement for citizenship.

“Madsy hates turkey,” The Dude continued, bringing his little sister into the argument.

“Madsy is a vegetarian and doesn’t count,” I fired back. My militant-non-meat-eating-locavore daughter dines on mashed potatoes and “Squanto Patties,” a.k.a. veggie burgers, on Thanksgiving.

“Dad would eat an armchair if you put enough gravy on it,” I fired back, a point which The Dude conceded.

“I think it would be so cool to come home from college for my first Thanksgiving and have steak and lobster,” The Dude said wistfully, which of course was the kiss of death for me, the turkey lover. I’m a real sucker for The Dude’s wistful tone. So right then and there I promised that for his first home-from-college Thanksgiving Dinner, the Maine State Crustacean would rule.

Even the militant vegetarian locavore, in spite of her job (more on that irony, later) was pleased.

“We need to support local lobstering families,” she said.

“Bugs,” I sniffed, referring to the local slang for lobsters. A.k.a. “slobbers.” A.k.a. prison-feed. Yes, it is a little known fact that back in Maine’s colonial period (when we were probably still part of Massachusetts) lobsters were so plentiful that they washed up on the shores and needed to be regularly swept away. In Thomaston, the site of one of Maine’s earliest prisons, inmates were forced to clean them off the beaches each day, boil and eat them. Apparently they became so sick of lobster they staged a rebellion.

Something which I am contemplating.

Don’t get me wrong: I love a good lobster in drawn butter. Outside, on a sunny Maine summer day. With boiled corn, potato chips and maybe even some steamed clams to start. You cook it all outside, so those smelly shelly fish odors drift overhead, instead of steaming up the house and soaking into the curtains.

In addition to the wonderful aroma a turkey affords, comes the absolute best part of the holiday: turkey sandwiches. My mother makes the best turkey sandwiches in the world, on white bread, with plenty of salt and full-fat mayo. I know friends who also put leftover stuffing (oooooh, stuffing!) and cranberry on their sandwiches, which I can appreciate but will pass on, thank you. You eat these behemoth sandwiches with ruffled potato chips while watching one of the Thanksgiving specials on television, like The Sound of Music, or The Ten Commandments, with the NRA’s very own Charlton Heston playing Moses.

“What are you going to tell Bob?” I asked The Vegetarian. She blanched. My daughter works for a farmer out of New Sharon, Maine: Bob, the Turkey Guy. Antibiotic-free, walkin’ around, big white turkeys. I am loathe to call them “free range,” because when you drive past the turkey farm in New Sharon, where hundreds of the birds lounge in a packed dirt yard behind a high, wire fence, there doesn’t appear to be much ranging going on, although they could. A bit. Bob’s turkeys appear to mostly sit, peck each other, and gobble grouchily.

“He’ll wonder why we’re not buying a bird from him,” she mused. She is going to be at the local farm the day before Thanksgiving, helping pass out some 250 enormous, freshly “dressed” (the polite term for “slaughtered”) birds to people who ordered them in advance.

Well, we certainly wouldn’t want to hurt Bob’s feelings, so Mom, the Turkey Lover, came up with the perfect solution. I ordered a large turkey breast from Bob, explained that’s all we were cooking for the holiday, and on Wednesday, the day before we carve (or rather, dissect) our Thanksgiving Lobsters, I’m making my favorite dinner. With mashed potatoes. STUFFING. And cranberry sauce.

Not the Big Bird, but it will suffice. And the point of the whole day, anyway, is to welcome home the ones you love. Such as The Dude.

I am so grateful for him, as well as my hard-working vegetarian daughter who reminds us all how important it is to Know Thy Farmer and support local businesses. For my non-picky omnivore husband who would indeed eat an armchair, without complaint, if it were properly seasoned. For all my fabulous memories of my extended family with decades worth of Thanksgiving recipes and traditions and stories (like the year my mother dropped the cooked turkey on the floor and my abuela slipped in the grease and there they both were, sliding, sliding … ) For Ben Franklin, Turkey Bob, Squanto … and stuffing. Above all, stuffing.
Posted by Maria Padian at 12:09 PM No comments: 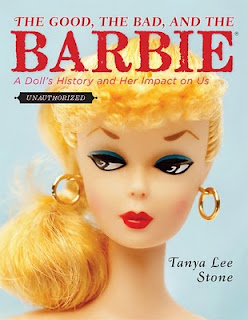 When I was growing up, I loved Barbie.

I know, I know, this is SO not politically correct. Barbie is not anatomically accurate. Her waist is too thin and her boobs are too big and her clothes are too fabulous. She sends a nefarious, subconscious message to our girls and gives them all Cinderella complexes and eating disorders. She corrupts their values so they are hell bent on living materialistic lives and working solely to obtain wonderful wardrobes and fun sports cars.

Barbie is perfectly positioned to ruin a girl’s self image. Barbie is the great destroyer of everything we want our smart, healthy girls to be.

Now, back to why I loved her …

I played for hours with Barbie, and her friend, Midge, who, in retrospect, I believe was of mixed race origins. Midge had coffee-colored skin, freckles, and brown/red hair. I don’t know how I ended up with Midge in my collection, because she quickly became a “discontinued” doll. I suspect my Hispanic mother slipped her into my box of Barbie stuff, no comment required, and I loved her as much as I loved the pale, blond dolls.

I was a girl who heard, daily, that I was smart and going places. I would be the first in my family to go to college. I would have a career, and help make the world a better place. My mother filled my head with these messages as she simultaneously bought me Barbies and filled my case with the tiny, little-bound-feet stiletto Barbie shoes. The impossibly tiny belts. The glittery body sheaths.

Here’s what I never played with: baby dolls. I abhorred those fat, pink, bald plastic babies that you pretended to change and feed. I mean, please. Boring.

Barbie, on the other hand, had a job. She and her girlfriends got up every morning, put on their swell outfits, jumped into their fast car, and zipped off to work in Manhattan. They didn’t have any kitchen supplies: they ate out at exotic restaurants every night. They danced until dawn on the weekends, and their conversations revolved around the fascinating people they met: not burping, teething, or strolling. Barbie was not a mother; she was a professional. And for the record, my Barbie did not date a sugar stick like Ken.

Now, she didn’t live with Joe. Oh, no. The “guys” (owned by my brother) lived in their jeep on the couch, while Barbie and girls set up camp under the coffee table. You see, Barbie liked guys, a lot, but didn’t need a man to complete her. She was perfectly happy picnicking with Joe and the Dudes every once in a while, but please, boys: stay on the couch. Us girls are having way too much fun right now.

What can I say? Long after I put Barbie aside, I went to college, worked at a bunch of interesting jobs, married (someone who is neither a male model nor a Green Beret) , became a mother (and discovered that while changing and burping is NEVER interesting, loving a child is extraordinary) and continue to develop my career. I doubt Barbie had much to do with my life choices, but having a strong mother sure did.

Author Tanya Lee Stone’s new book, The Good, the Bad, and the Barbie, has just been released and I can’t wait to read it. It’s gotten great reviews, and I look forward to seeing what others have to say about my girl, both the good and the bad. For more info, visit the author's website at: http://www.tanyastone.com/index.php?id=51
Posted by Maria Padian at 6:40 AM No comments: