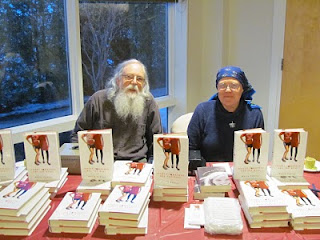 Until very recently, I didn't know what a "Blog Tour" was. I don't want to confess how recently, because that would reveal my complete ineptness (is that word?) when it comes to Cyberworld Book Promotion, and book promotion in general ...
I had always assumed you promoted a book by going to bookstores and signing copies, or getting invited to nice events where people wanted to hear you talk about yourself or your book, and maybe they'd buy a copy. Pictured to the left is the "standard fare" of book promotion: stacks of Jersey Tomatoes Are the Best, offered for sale by a couple of very nice people, Gary Lawless and Beth Leonard of Gulf of Maine Books, an Indie Extraordinaire. They attended my book launch party, sold a few copies, and I signed.
That's it, right? Authors head out to stores or libraries or conferences, meet people, and sign books. In person.
But then my publicist told me that Tomatoes would be out on a Virtual Tour, a.k.a. a Blog Tour, and in the course of a mere week we can visit thousands of potential readers from all over the world, let alone Main Street in our home towns. If you're like me, and have only just learned about this sort of thing, here's how it works:
For five days, five different young adult bloggers will post reviews and interviews about Jersey Tomatoes Are the Best. Each blogger has asked different questions, so if you follow the tour you won't be subjected to the same material over and over. At the conclusion of each post, they'll "link" to the next day's blogger, as well as reference the previous post. It's a great way to spread the word about the book, as well as connect "followers" from one blog to another.
Most of the bloggers on the tour will be offering contests/book giveaways, so if you're interested you could win a copy of Tomatoes!
Here's the lineup for the Jersey Tomatoes Are the Best Blog Tour. I hope you can drop in for some, if not all, the stops along the way:
Monday, March 28: Steph Su Reads http://stephsureads.blogspot.com/
Tuesday, March 29: The Book Butterfly http://thebookbutterfly.com/
Wednesday, March 30: Random Acts of Reading http://randomactsofreading.wordpress.com/
Thursday, March 31: The Reading Zone http://thereadingzone.wordpress.com/
Friday, April 1st: Cleverly Inked http://cleverlyinked.com/
Posted by Maria Padian at 2:49 PM