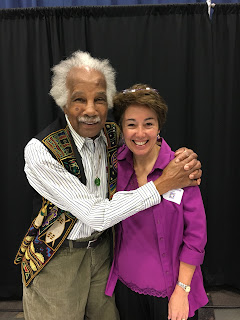 I’m one of the lucky people who had the privilege of meeting Mr. Bryan in person. That was in 2016 in Augusta, Maine at the Reading Roundup Conference where he received the Lupine Award for his picture book, Freedom Over Me. Frail in body (he was pushed to the stage in a wheelchair) but still so exuberant in spirit, he had everyone in that audience of 300+ on their feet, clapping and cheering as he received his award with a call-and-response prose poem from the podium.

He was absolutely one of those rare humans you’d describe as “incandescent.” He was lit from within, and in that crowded, overwhelming space I couldn’t help marveling at how he brought light to each room he entered and kind attention to each individual he encountered. It’s reported that visitors to his Maine home/studio on Little Cranberry Island were greeted with hugs and gummy bears … and as the recipient of one of those hugs, I can say: they were pretty amazing.

I can think of no better way to honor this special human than to focus on his work, and I hope in the weeks and months ahead fresh attention will be drawn to his many, many books. He signed my copy of Freedom Over Me that day I met him, so I’ll share a bit about that one. 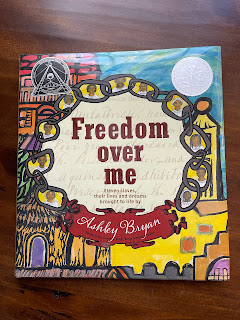 Inspired by a document Bryan acquired years ago — an estate appraisement dating back to 1828, in which eleven slaves are listed for sale with the cows, hogs and cotton — the book brings to life not only who those eleven might have been, but their dreams for themselves. It’s a gorgeous, fabulous leap of empathy and imagination, and — dare I say it? — so, so important. Especially given the paucity of the “record.” We know nothing as a fact about these souls, save for their estimated age, the name they were assigned by their enslavers, and the price they fetched.

There’s a horror in that paucity, and in that specificity. It calls to mind the records the Nazi’s kept at concentration camps. It reminds me of my visit, years ago, to the Famine Museum in Strokestown, Ireland, where all that remains of the thousands of evicted tenants who worked the land of the Strokestown Park House are their names and ages, listed on the passenger rosters of “coffin ships” bound for the U.S. and Canada.

In a column published only last week, the writer Jamelle Bowie explores this conundrum: in recent decades, vast amounts of data about the slave trade has been curated and made available online. The SlaveVoyages website is an incredible resource, making the sorts of paper scraps Ashley Bryan acquired and saved and considered available to the world. But to what end? As Bowie writes:

“How exactly do we relate to data that allows someone — anyone — to identify a specific enslaved person? How do we wield these powerful tools for quantitative analysis without abstracting the human reality away from the story? And what does it mean to study something as wicked and monstrous as the slave trade using some of the tools of the trade itself?”

It takes someone with as big a heart and as compassionate a vision as Ashley Bryan to prevent the sort of distancing and abstraction Bowie warns us about. It takes art, to turn an appraisement document into a celebration of lost souls. It takes triumphant books like Freedom Over Me.

Ashley Bryan saw the world in all its brokenness and still found room for hope. He showed all of us who hope to create, how to gather the shattered bits of life into something beautiful.