Stories come to me from a whole lot of directions, but I think it’s fair to say How to Build a Heart draws most heavily, of all my books, from my personal experience and from family. Not only the one I grew up in, but also the one I chose. Meaning: my husband.

Conrad Gustav Schneider is a Southern boy from North Carolina. He loves Tar Heels basketball, barbecue and biscuits. With a name like his, you’d expect him to be from Mainz or Berlin, but he grew up in Davidson, with a mom who could trace her roots back to Andrew Jackson.

His dad, however, was Fritz from Berlin. Long story about how he met Conrad’s mom, but suffice it to say it wasn’t easy growing up with a German dad and a name like Conrad when one of the most popular television shows at the time was Hogan’s Heroes. (For those who haven’t had the pleasure: this was a sitcom set in a Nazi POW camp, in which the hilarious, clever allied prisoners constantly outwit the bumbling, ridiculous Colonel Klink and Sergeant Schultz. It ran from 1965 to 1971: Conrad’s prime “growing up” years.)

I won’t detail the bullying he endured, but his perceived outsider status, combined with being part of the first class of North Carolinians to attend integrated, “bused” public school from grades K through 12, has always helped Conrad see the world differently than people for whom identity was clear and simple and inclusion unquestioned.

The first page of a galley often includes an author letter, where we have a chance to share what inspires a particular book. As I said, I can’t point to just one starting point for any of my novels, but without a doubt the immigrant experience and the challenges of learning a new language and finding your place in a new culture … which were part my family’s story as well as Conrad’s … played a big role in How to Build a Heart.

Most readers will never read the galley, or this letter, so as part of the run-up to the cover reveal on Friday, I’ll share it here: 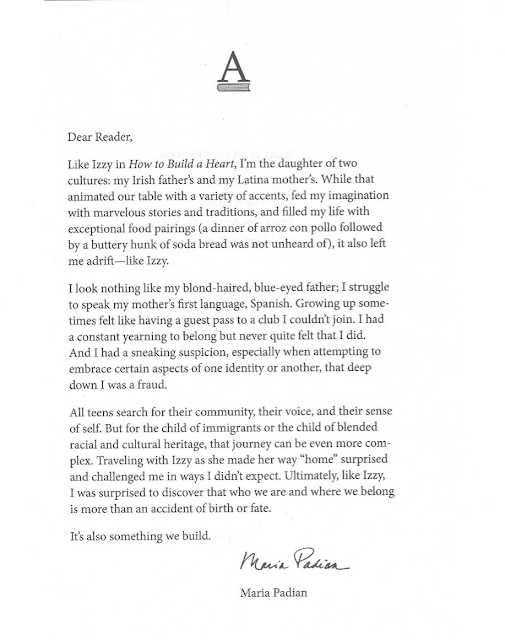