I recently joined a Facebook group called Children’s Authors and Illustrators, and they’ve started a discussion where folks can share their first-time publication stories.

They run the gamut. From the self-published to “A miracle occurred and they found my manuscript in the slush pile” to “My agent did it all!” There seems to be no single road to the Land of Publication, although one consistent point emerged: to fuel this journey, you’ve gotta work hard.

Years … no, decades of apprenticeship where you write fairly horrible, unreadable stuff that you file in boxes in your basement. Years when you spend most of the day at a “paying” job, only to squeeze the writing time in the slim spaces between sleep and commuting. Months you spend on the first 150 pages of a novel that seems to just write itself … only to hear from your most trusted critique partner that the concept is completely undoable and would you abandon it now, please?

But then, lightening strikes. You find your story. It’s not easy to write, but it feels good, so you go with it. Next thing you know, you’re typing “The End,” (which, by the way, is a tremendous, awesome rush) and photocopying it for readers, who tell you they love it, but …. So you fix the “buts” and send it to an agent (that’s the other thing that emerged from the Facebook discussion: nowadays you need an agent.) who loves it, but …. So you fix more “buts” and the agent sends your baby out into the wilds of first-round submissions to publishing houses and … kaboom. Someone likes it. Loves it, actually, and believes in it, and you, and is going to send you money and bind your baby with a cover and slap an ISBN number on it just to make the Library of Congress happy and Life is Good. And it seems, in that moment, that this just happened … but it didn’t. It took years, and lots and lots of hard work.

So it was with particular joy that I attended a book signing this past Saturday at the Gulf of Maine Bookstore in Brunswick, Maine, to hear my friend, Paul Doiron, read from his debut novel The Poacher’s Son. Paul is the editor in chief of Down East magazine as well as a registered Maine Guide and outdoorsman, and has written a literary detective novel set in the North Woods. It was sold as a three-book deal, has received more starred reviews than I can recount here, was reviewed in the NYTimes book review and reportedly (although Paul won’t swear to this) had an initial print run of 100,000. Now that’s a lightening strike. 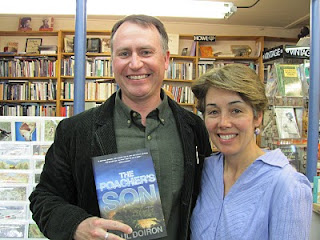 Here are Paul and I at his signing at Gulf of Maine Bookstore.

But here’s the fact of the matter: even if that book had nary a starred review, a meager print run and no advance, it’s a thrill. There’s nothing quite like seeing the UPS guy pull into your driveway with that carton from your publisher. Nothing quite like ripping it open and … there it is. Your story, all dressed up like a real book.

And a signing, with an audience filled with friends, is such a gift. Gary Lawless, a poet and proprietor at Gulf of Maine, embodies the Independent Bookstore Owner Platonic Ideal. His well-stocked shelves are packed with great reads you’d never find at a chain store, and Gary and his partner, Beth, always seem to have all day to chat and share stories. 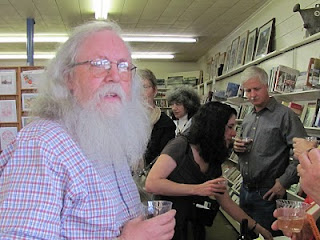 This is Gary Lawless of Gulf of Maine Bookstore.

They also know how to throw a terrific book signing! I hurried home with my copies of The Poacher’s Son and stayed up late reading about Game Warden Mike Bowditch …