So I'm at that wonderful stage with my latest book where I've finished all the hard work (ie. writing and revising) and now my publisher takes over with the fun stuff (ie. creating a cover, marketing, printing, selling, shipping ...)
Whoops. Did I just type "fun?" Did I type "wonderful?" Let's delete those adjectives and start over.
I'm at that nerve-wracking stage with my latest book where the part I control (ie. the words on the page) is complete, and now my publisher is in control (ie. creating a cover.) Before I became a published writer, I dreamed of this stage. This magic, where your tenderly crafted story is transformed from a stack of double-spaced typed pages to a realio trulio book that strangers can find in a library or bookstore.
Little did I realize, back when I was uninitiated and unpublished, that even if one has a fabulous editor (which I do) one cannot possibly prepare for the whims and fancies of the rest of the unseen horde working in that big publishing office in New York. It reminds me of sending a child off to elementary school: you think the teacher is the only adult she'll have to deal with. You never consider all the others who weigh in during your child's school days, like the mean lunch ladies, the grouchy bus driver, and the scary principal. Even with a great teacher in the classroom, those other folks influence a child's school days. Seriously.

A few months ago I saw a draft cover design for my new book, Jersey Tomatoes Are the Best, which will launch in early 2011. I really liked it. It was clever and eye catching and age appropriate and definitely something a teen would pick up. That's the key here: would a kid pick this up? Because let's face it, teen readers DO judge books by their covers.

So, I was happy. Surprisingly relieved. Because the road to the cover of my first book, Brett McCarthy: Work in Progress, was a tad bumpy. It seemed that this time, with Tomatoes, it was going to be smooth sailing.

Then, a few days ago, the bad news arrived: the lunch ladies didn't like the cover. New designs were in the making.

On the one hand, I'm grateful that so much careful attention is being given to my book. And unlike many of my writer friends, I have a publisher who puts a real effort into marketing; they did a lot to promote Brett. But I'm wary ...

Initially, Brett was titled Demigods, Brainiacs and Big, Bad News. When it came time to design the cover, my publisher wanted a different title, something which reflected that every chapter of the book began with one of the character's 8th grade vocabulary words. We conjured up 45 Definitions of Brett McCarthy and this is what the design people delivered: 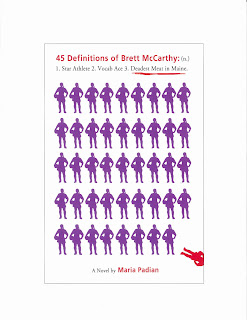 I had a strong, visceral reaction to this cover. The copy at the top clearly draws on the "definitions" idea, which is cool. But the rest looked like a target at a firing range, with purple soccer girls all in a vulnerable array. And with a fatality at the bottom.

Here's the thing: no one gets shot in this book. It's a story about friendship. It's humorous. The cover clearly didn't match the "spirit" of the novel ... and we realized the problem was the title. 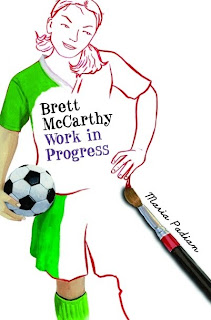 So, my editor and I brainstormed over the phone, and we came up with Brett McCarthy: Work in Progress. On the right is that cover:

This is the image used for the paperback Advance Reader Copies the publisher mailed to promote Brett. I liked it. It captures the main character's personality, and I loved the visual play on the work-in-progress theme. I especially liked the paintbrush with my name above it.

But then ... it got dinged. Someone somewhere in that vast building in New York felt it looked too much like a sports book and looked too "young." They wanted something that non-sportsy girls would read, and might appeal to older readers. So, back to the drawing board, and this is the version which eventually shipped in hardcover: 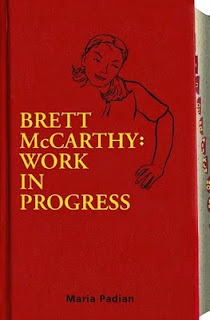 You see the basic idea, right? A dictionary. Merriam Webster's Collegiate, to be precise, and on the right are the wonderful little tabs you use to get right to the word you're looking up. The main character, Brett, is redefining herself throughout this story, so that's the theme they put right on the cover. Along with a truncated line drawing of a girl that used to be a soccer player.

I'm not going to detail my emotional reactions throughout this process, except to say my poor agent took the brunt of it. She's also the one who eventually told me it was time to stop arguing with the publisher because I was, after all, a first-time midlist author who had limited influence over this stage. And as usual, she was right. I'm no J.K. Rowling, and in this economy I should probably be grateful that I even sold a book.

I'll just say that when I visit schools today and ask the kids to raise their hands if they like to read books that remind them of dictionaries, nary a hand goes up.
Shortly after Brett launched, I learned that the paperback version would have an entirely different cover design. Today, this is what Brett looks like: 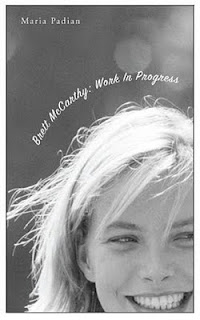 I like it. A lot. I don't think that's necessarily Brett on the cover, but it sure looks like one of her friends. And it most definitely captures the spirit of the main character and the book as a whole.

So now, with this latest news from my publisher, I guess it's once more into the breach. Jersey Tomatoes Are the Best is about two teens from ... you guessed ... New Jersey. They are extraordinary: one is a state champion tennis player who gets recruited by a tennis academy in Florida; the other is a gifted ballerina who is chosen for a prestigious ballet school in New York. It's a story about the pressure gifted kids face as they learn to take ownership of their futures as well as deal with the expectations of the adults in their lives. It's also about friendship, and what we'll do ... or not do ... for the people we love.

I think there should definitely be tomatoes on the cover ....
Posted by Maria Padian at 4:40 AM